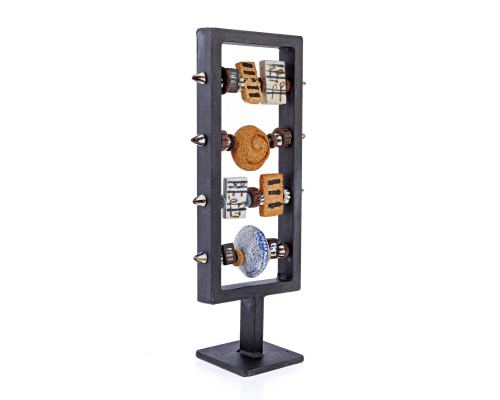 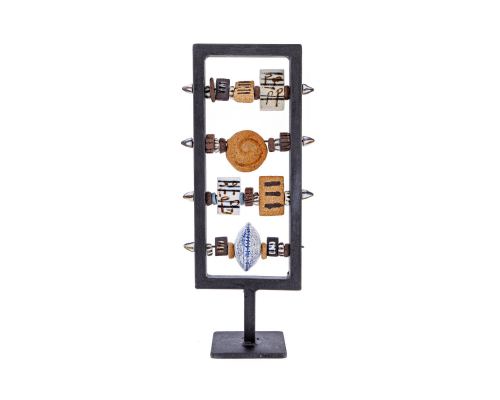 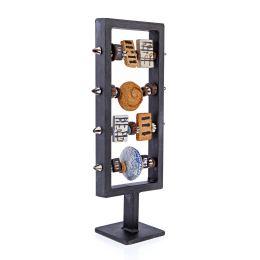 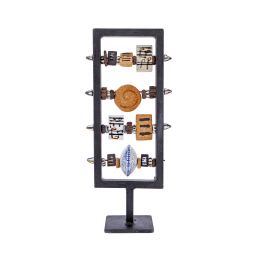 Original Artwork. Impressive Stoneware and Porcelain Abacus Marbles, With Metal Frame on a Stand.
Impressive -Rather- LARGE SIZE Abacus of High Quality.
This Abacus Sculpture  Consists of 3 Marble Lines, of Abstract Hand Painted Ceramic and Porcelain Rotating Beads, with Carefully Finished Bold Ends, All Included in a Metal Black Frame, on a Square thin metal stand.
Authentic Abacus Decor Centerpiece, Ideal for Interior Decoration of Residences or Corporate Offices, Lougnes, Hotel Lobbies and Halls.
Dimensions:
Length 5.5" (14cm)
Width 1.1" (3cm)
Height 15.7" (40cm)
Weight 4.2 lbs (1.9kg)
Additional info:
Ceramic or pottery refers to a process of forming, firing or baking, and glazing or decorating a mixture of clay and other materials, then refiring it to harden the glaze.
The three ceramics are earthenware, stoneware and porcelain.
Stoneware is made from a particular type of clay that is fired at high temperatures, generally up to 2,372 °F (or 1,300 °C).
Stoneware, named after its dense stone like quality after firing, is tougher and more durable.

The abacus (plural abaci or abacuses), also called a counting frame, is a calculating tool that was in use in Europe, China and Russia, centuries before the adoption of the written Hindu–Arabic numeral system.[1] The exact origin of the abacus is still unknown. Today, abaci are often constructed as a bamboo frame with beads sliding on wires, but originally they were beans or stones moved in grooves in sand or on tablets of wood, stone, or metal.

Abaci come in different designs. Some designs, like the bead frame consisting of beads divided into tens, are used mainly to teach arithmetic, although they remain popular in the post-Soviet states as a tool. Other designs, such as the Japanese soroban, have been used for practical calculations even involving several digits. For any particular abacus design, there usually are numerous different methods to perform a certain type of calculation, which may include basic operations like addition and multiplication, or even more complex ones, such as calculating square roots.Some of these methods may work with non-natural numbers (numbers such as 1.5 and ​3⁄4).

Although today many use calculators and computers instead of abaci to calculate, abaci still remain in common use in some countries. Merchants, traders and clerks in some parts of Eastern Europe, Russia, China and Africa use abaci, and they are still used to teach arithmetic to children.[1] Some people who are unable to use a calculator because of visual impairment may use an abacus.
Related Products
Quick view